My daughter unfortunately got a little spoiled with random Amazon packages showing up at our door with her name on it over the last few months from grandparents who couldn’t see her in person. One of the boxes, though, had a treat of a present for both of us. A cookbook! 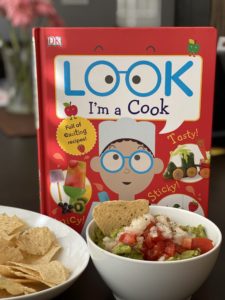 SPOILER ALERT for those of you with little time: We got our guac on. Skip down to the bottom of this post for the full recipe.

“Is she too young to cook me dinner?” I asked myself, pondering what it would be like to have an almost five-year-old plate me a divine dish of pasta, maybe some seared scallops, and freshly sauteed spinach. But then she yelled my name while standing next to me to ask me to get her water which was approximately 6 inches from her AND the same place she got her own water from only moments before. A girl can dream…

Back to this cookbook. More specifically, Look I’m a Cook published by DK a la Amazon. We thumbed through the pages and found a few manageable recipes to tackle. Here’s our attempt at the Greenest Guacamole.

Reminding myself this mother-daughter activity was not about taste, we first gathered all our ingredients…and played with them. We then talked about the similarities and differences between the ingredients and what letter each one starts with. Always. Be. Learning. 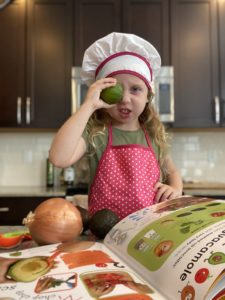 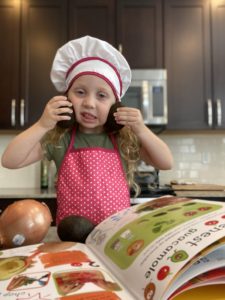 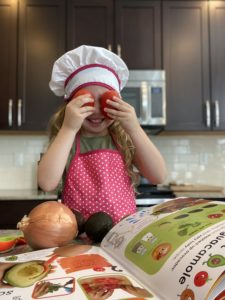 Next, we chopped the tomatoes and attempted to grate the onions as called for in the recipe (see below). After burning my eyes out of their sockets with grated onion, we switched to chopping a small amount of onion. Only after, though, I “engaged” my daughter and got her to smell the onion several times. Gotta entertain myself! Seriously though, I do not recommend grating anything, especially not onions, when you have a small child around. It really felt like I was setting myself up for a visit to the hospital with watery eyes so blurry that I couldn’t see how close my fingertips were to the grater.

As my hunger started to set in, I decided we needed to speed things up. I cut all the avocados in half and removed the pits. While I continued chopping for what felt like 3 years, my daughter started scooping the avocado halves. Many moons later, we had our scooped avocado in a bowl ready to be mashed. 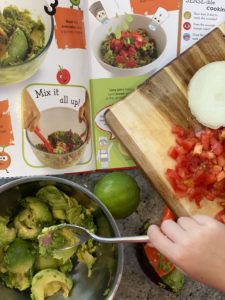 Potato masher in hand, my daughter showed those avocados who was in charge. Her. She’s in charge. I’m not even ashamed to admit it.

We then added our chopped veggies to the avocado mush – I mean mash – and squeezed half a lime over the top along with some salt and pepper for taste.

We mixed it all up, poured some Tostitos in a bowl, and got the drum roll going. Taste test time! 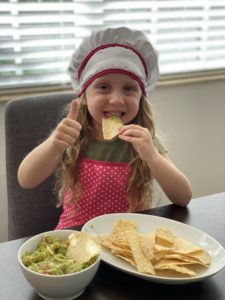 Pat myself on the back time. The guacamole tasted great, my daughter thoroughly understands the danger of a fresh onion, and she has a new love for cooking. Success!

If you want to try the Greenest Guacamole yourself, here’s what you need (besides 20 minutes of your time and a can-do attitude):

Let us know if you enjoyed getting your guac on as much as we did! 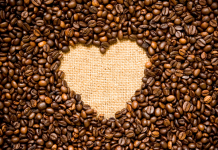 Bean Juice Is The Best 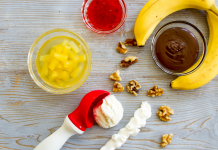 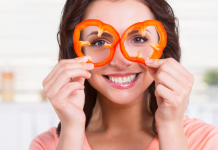