PLUNGE INTO THE ARTS WITH KHAI PHAN 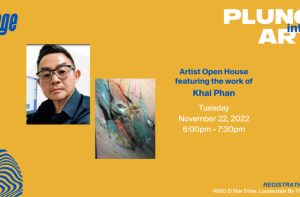 About Khai: Khai Phan was born in Vietnam, and his family immigrated to the United States in 1979, when he was 4 years old. He found himself attracted to drawing and painting at a very young age. Throughout his school days, he tried to excel with every art project. During his college years, he set aside his passion for art and focused his attention on the worlds of science and medicine.

After establishing his career as an optometrist in his 20’s, he decided in his 30’s to integrate both worlds, arts and medicine. Abstract expressionism, as a genre, is particularly attractive to him. As an eye doctor, the objective science of the eye coupled with the fluidity of the mind’s interpretation of what it perceives is what moves Khai to create his work. It is this dynamic where he finds the most depth and intrigue in a piece.

Inspired by Kandinsky and de Kooning, he creates works that contain opposing facets. There is movement in a static image. There is texture from what should be a flat plane. There is a window into the dream-like world which can only be attained through the mundane firing of synapses. Through this conflict, as in the universe as a whole, a balance is found. He hopes you enjoy his work as much as he did creating it for you.

Family Guide To Turkey Giveaways And Thanksgiving Meals In Broward

Join Us For Mom’s Night Out!

Let It Snow at Dania Pointe

Let It Snow at Dania Pointe